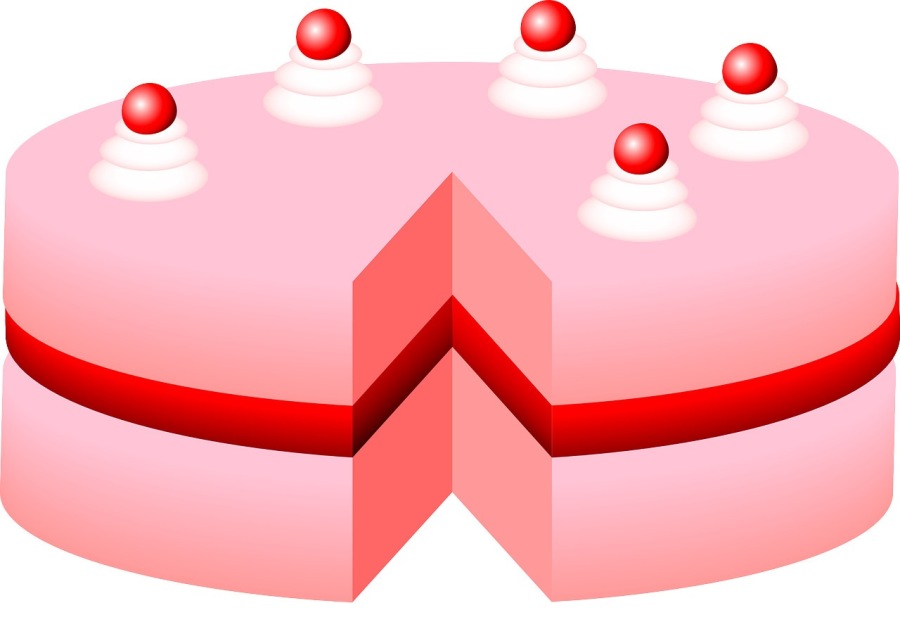 Alex has a birthday party, and he's invited 8 of his friends to attend. Seven of them have accepted and showed up. They are about to cut the cake (markings on the cake's perimeter have already been made) when the 8th friend, who is also his best friend, shows up too. Can they still cut the cake into nine equal pieces so that it's mathematically fair (i.e., everyone gets the same amount of cake)? How could they implement the (mathematical) solution in practice? Hint: not all nine pieces need to be of the same shape. Also, you can assume that the cake is a disc where all the material is distributed evenly.

One of Alex's friends came up with a solution to this conundrum. This solution helped Alex realize how to tackle a problem in his Math homework. Based on all this, can you answer the bonus question: which one of the following would be an appropriate gift for Alex: a bicycle with training wheels, a normal bicycle, or a motorcycle? You can assume that Alex is a normal person in terms of his mental and physical development and that none of the people in his party is a mathematical genius!

This simple problem is one I came up with recently, as I was exploring recreational math, particularly Geometry. It can be solved without any advanced tools or methods (in fact, if you employ a bit of imagination, you could solve it in your head, with mathematical precision). Note that this problem would not work if he had a different number of people to divide the cake into (e.g., 7 or 13). There's just something special about the number nine, making the problem lend itself to an elegant geometrical solution. Cheers!

PS - I plan to reveal the solution within a week or so.

#15
That's actually a slicker approach. Thanks for pointing it out!

Zacharias, since the task was to cut the cake into 𝗻𝗶𝗻𝗲 𝗲𝗾𝘂𝗮𝗹 𝗽𝗶𝗲𝗰𝗲𝘀, the alternative solution of 72 small pieces isn't in accordance with the required. I suggest cutting the cake into 3 equal pieces on the x-y plane (you can only use a knife as a measure for the radius) and in 3 equal pieces on the z-axis (3 layers) to get 9 pieces in total. Cheers!

So, the solution I had in mind for the problem is the one that Lada came up with. An alternative solution that's equally valid consists of a 3-D approach to the problem. This involves cutting the cake into 8 equal pieces on the x-y plane and in 9 equal pieces on the z-axis (9 layers). Effectively, we get 8x9=72 small pieces, which we divide among the 9 cake-eaters, each getting 8 of them. As for the gift that's most suitable for Alex, this would be a regular bike, since he's probably in the mid-school age group and although he would love a motorcycle, it wouldn't be responsible to give him one (also the bike with training wheels is something he wouldn't value much unless he traded it for additional cake!). Note that the same problem lends itself to 25 persons sharing the cake, though in this case, the former solution would be more practical. Cheers

By the way, the purpose of this problem is to hone one's problem-solving skills and, if so inclined, exercise one's creativity. I find such problems fun and educational, definitely more interesting than the stuff we have encountered at school. I hope you view it this way also :-)

#11
That's the solution I came up with myself! Thank you for your contribution! :-) Just this morning I was talking with a mentee of mine and he came up with another solution, one that's equally elegant. Can anyone guess it?

Zacharias, I am glad to read an article on beBee that is not related to Covid. :) You shared a good puzzle. One doesn't have to be a mathematical genius to solve this conundrum, but some basic knowledge about geometry is required, as those children showed. :) Since the markings on the cake's perimeter have already been made for 8 pieces (and on the surface of the cake to the centre I presume), you only need to create one more piece of cake. Cutting out a circle with a radius of 1/3 the radius of the cake (measured from the centre), you got a new round cake in the middle of your existing cake. It is easy to cut out a circle if making marks on every eight lines. The area of a circle of this inner cake is 1/9 of the total surface area (the magic of the number nine). Then, by following markings on the surface, cut eight pieces in the outer ring-shaped cake. It will result in nine pieces of the same amount. The central piece is not of the same shape as other eight, but it is according to your hint that not all nine pieces need to be of the same shape. :) There's also one more way of cutting. Cheers!

#8
That's one way of doing this! What if we don't have a way to measure angles though? Please don't eat all the cake by yourself - with the lockdown and all, it's hard to find a doctor if you have digestion problems afterwards :-)

Re the cake in the picture, an additional problem what if there fewer than or more than nine cherries on top of the swirling cream?

The cake is circular. A circle has 360 degrees. 360 ÷ 9 = 40. Using a protractor mark the perimeter at 40 80 120 degrees etc. Mark the middle point, cut accordingly. How you actually measure the points I'll leave people to work out for themselves. Hint anyone got a circular protractor? If you have you can mark the middle of the cake first then the nine points are easy to mark. It works ive just done it. Ive eaten one piece, what to do with the rest. With lockdown I suppose i will have to eat it all myself.

#5
Well, people's imagination may run wild, imagining some weird, uneven cake, so I wanted to make it clear that this is an ordinary birthday cake, like the one in the image I found on Pixabay :-)

Yea yea yea--you'll insert yourself into the equation and eat the 8th piece yourself. *kidding*

i wonder the quality of cake has anything to do to make a conundrum with quantity Zacharias \ud83d\udc1d Voulgaris? it perhaps only engulf us in a trapped world of confusion.

I cannot count any further than 3 and I can't eat cake :-) thats a challenge alright

Lada \ud83c\udfe1 Prkic, since you are a geometry aficionado, I'm sure you'll enjoy this challenge :-)

HaHa! Interesting Zacharias \ud83d\udc1d Voulgaris I will ponder this and get back to you