The Cultivation of Detest in Our Fellow Human Beings 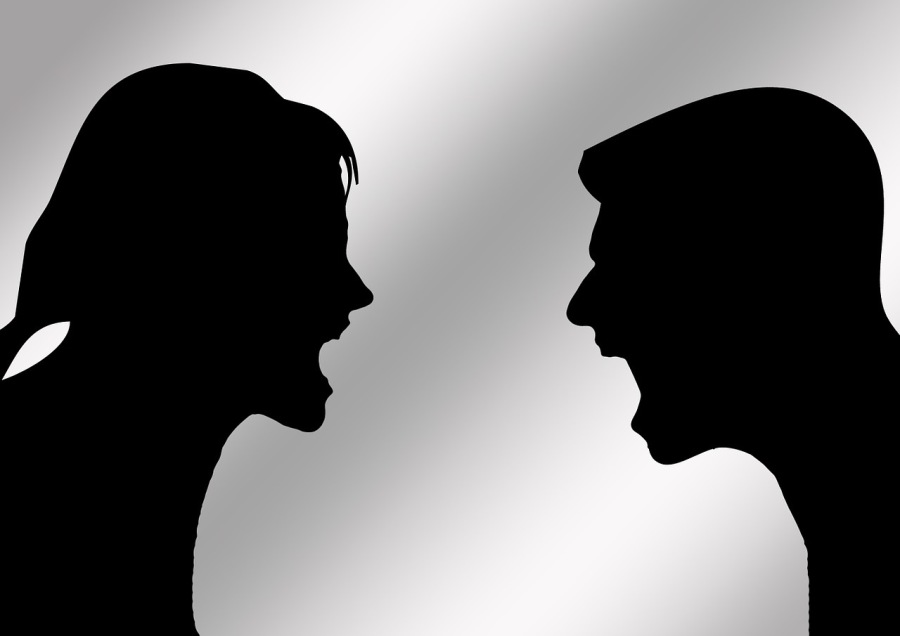 The title of this article may seem a bit exaggerated but bear with me for a few minutes before you pass judgment on it. By the way, I'm not referring to beBee or any other free-speech platform, but the world at large, at the time of this writing.

So, why would someone detest someone else? Apart from cases where the former is threatened by the latter (e.g., when the latter trespasses the former's personal space or violates his rights, especially in a provocative manner), this doesn't happen normally. Unless, of course, there are ideologies at play. Now, you may think that you are immune to such petty divisions and that you love your neighbor like yourself, even if that person follows a different worldview. Well, when was it the last time you put this to the test? By the way, ideologies can be very mundane, such as subscribing to this or the other variant of a scientific theory. Many people in the Physics community are divided by their theories (or interpretations of them) about the world. Also, today many people are divided by their views on what constitutes proper behavior towards the whole covid-19 situation. So much so that from both sides of the fence, the supporters of this or the other view tend to think of the others as idiots or worse. Never mind the fact that some people may have changed sides over the past few months and that, given different circumstances, they might be on the other side of the fence.

I'm not going to try to convince you of what side of this (or any other) polarization of a view is better. You can research that on your own. However, I'd like to focus on the sentiment that lingers even after the views are discussed. It's usually a negative sentiment since no clear conclusion is reached most of the time (usually due to practical reasons). Gradually, people who disagree on an important matter start to detest each other. So much so that having a face to face conversation becomes harder and harder since neither one is willing to listen or entertain the other person's point of view. This situation is reminiscent of being in the trenches during World War I battles or behind other barricades in more modern warfare. Who would have thought that these shields of protection would become walls inside our minds!

People always had their differences, but they were mature enough to deal with them and often overcome them or reach some peaceful solution. Few times in history did we have the equivalent of a cold war where we thought of the people on the other side of the fence as being evil. There is no doubt in my mind that evil exists in this world, but I'm skeptical as to whether it manifests fully on the people with whom I disagree. That's why I often follow people with a completely different worldview and try to find some merit in their writings. Upon doing so, I discover that they are not as extreme as I thought and that there are some points we both agree on, even if our disagreement on a specific topic lingers. This realization wouldn't have been possible if I detested them.

Various verses from the Bible often come to mind when I contemplate this topic. These make great quotes to live by, especially today. For example, at James 2:13, we see "For judgment will be merciless to one who has shown no mercy; mercy triumphs over judgment," while at John 5:22, we encounter "For not even the Father judges anyone, but He has given all judgment to the Son."

I mention these because it's often the misuse of our judgment ability that is the seed of detest. If left unattended, this can spread and grow in us, making us even detest our whole species and view the death of innocents as a necessary evil. And when we start looking at other lives (especially lives of sentient beings) as something we can put on a mathematical formula, then we may have gone too far. Perhaps that's why in the Kaballa, the tree of life, which often is used to summarize the presence of the divine in us, is comprised of three columns with Judgment (Severity) being on the one side and Mercy (Love) on the other. If only we'd try to balance the two with the column of Harmony (Consciousness, Equilibrium) instead of allowing divisions to reign supreme either within or outside ourselves!

This can be very disheartening, but it's important to remember that many behaviors form a cycle - "hurt people hurt people." Sharing articles like this help spread awareness and, hopefully, break the cycle. Thanks for sharing!

This is not restricted to business settings--it is used to disable individuality by governments everywhere. https://www.britannica.com/science/groupthink Groupthink psychology WRITTEN BY Anna Schmidt Anna Schmidt conducts academic and policy research across a range of international relations and political governance issues with particular emphasis on humanitarian aid evaluation and effectiveness, humanitarian... See Article History Groupthink, mode of thinking in which individual members of small cohesive groups tend to accept a viewpoint or conclusion that represents a perceived group consensus, whether or not the group members believe it to be valid, correct, or optimal. Groupthink reduces the efficiency of collective problem solving within such groups. The theory of groupthink was first developed by the social psychologist Irving Janis in his classic 1972 study, Victims of Groupthink: A Psychological Study of Foreign-Policy Decisions and Fiascoes, which focused on the psychological mechanism behind foreign policy decisions such as the Pearl Harbor bombing, the Vietnam War, and the Bay of Pigs invasion. Janis’s attempt to determine why groups consisting of highly intelligent individuals often made bad decisions renewed interest in the study of how group behaviours, biases, and pressures affect group decision making. Groupthink has become a widely accepted theory particularly in the fields of social psychology, foreign policy analysis, organizational theory, group decision-making sciences, and management. As such, the notion was revived to help explain the interpretation of intelligence information regarding weapons of mass destruction before the Iraq War (2003–11).

#6
More importantly--it is exactly what you are seeing in the general population now. Democrats/Republicans Pro-vaxxer/Anit-Vaxxers and on and on. Damn--I have to get a job with those people. They are just too good at this.

#5
I remember seeing that in a couple of the companies I worked for, back in Seattle. Not great, but I understand why some organizations have it, to maintain stability and coherence in their work force. Not my cup of tea though :-)

From Investopedia: Groupthink By WILL KENTON Updated Aug 24, 2020 What Is Groupthink? Groupthink is a phenomenon that occurs when a group of individuals reaches a consensus without critical reasoning or evaluation of the consequences or alternatives. Groupthink is based on a common desire not to upset the balance of a group of people. This desire creates a dynamic within a group whereby creativity and individuality tend to be stifled in order to avoid conflict. KEY TAKEAWAYS Groupthink is a phenomenon in which individuals overlook potential problems in the pursuit of consensus thinking. Any dissenters in the group who may attempt to introduce a rational argument are pressured to come around to the consensus and may even be censored. The Challenger shuttle disaster, the Bay of Pigs, Watergate, and the escalation of the Vietnam War are all considered possible consequences of groupthink. Understanding Groupthink In a business setting, groupthink can cause employees and supervisors to overlook potential problems in the pursuit of consensus thinking. Because individual critical thinking is de-emphasized or frowned upon, employees may self-censor and not suggest alternatives for fear of upsetting the status quo. A Brief History of the Groupthink Concept Yale University social psychologist Irving Janis coined the term groupthink in 1972. Janis theorized that groups of intelligent people sometimes make the worst possible decisions based on several factors. For example, the members of a group might all have similar backgrounds that could insulate them from the opinions of outside groups. Some organizations have no clear rules upon which to make decisions. Groupthink occurs when a party ignores logical alternatives and makes irrational decisions. Fast Fact Groupthink is not always problematic. In the best cases, it allows a group to make decisions, complete tasks, and finish projects quickly and efficiently. In the worst cases, it leads to poor

#2
Pascal Derrien I find that you are very correct in your interpretation of the situation. It seems that there is far more condemnation than I am used to seeing.

Now you're in my world--psychology. Divide and Conquer groupthink. A Freudian thing. People resist learning about it [I think] because you've been brainwashed to do so. Joe Dubs' article tells you much here: https://www.bebee.com/producer/@joyce-bowen/propaganda-mind-manipulation-and-manufacturing-consent-by-joe-dubs

My sentiment exactly which is also why I have avoided stepping or commenting into some polarized conversations .In my line of work I have to cater for overly Covid anxious to fierce conspiracy theorist both sides make a lot of noise and take a lot of space claiming both that the sky is falling while I am almost sure the critical mass in between has become very tired of both arguments. Similar behaviours took place during the Spanish Flu, the plague etc etc etc I think Covid is only exacerbating a pre existing behaviour

Interesting discussion. I think you are correct we need to get above the daily right/wrong challenges and get a breath of fresh air. The Bible does offer us some challenging thoughts as we consider the engagements of today. A recent study demonstrated the subtlety of teaching more than the direct do and don't do standards we gravitate towards. Acts 2:12 displays a people perplexed by the pentecost, their question what does this mean? Peter preaches In Acts 2:37 The people ask what shall we do. Peter tells them. This is a model of discernment. Each side must ask what it means and receive council or debate. Once closed then we ask what shall we do? In today's era all the questions get answered via media then we begin discuss how someone else is wrong. A dead end as to solution between the two. But we should all fear that time is the ultimate arbiter of unreconciled debate. Instead of choosing through human discourse the second law of thermodynamics decides. If time permits Steven Covey offers a great solution to this right/wrong debate spiral. Seek First to understand then be understood. His basic premise is we speak in conclusions instead of listening. Great discussion topic and thoughts.