The Value(s) of Good Engineering 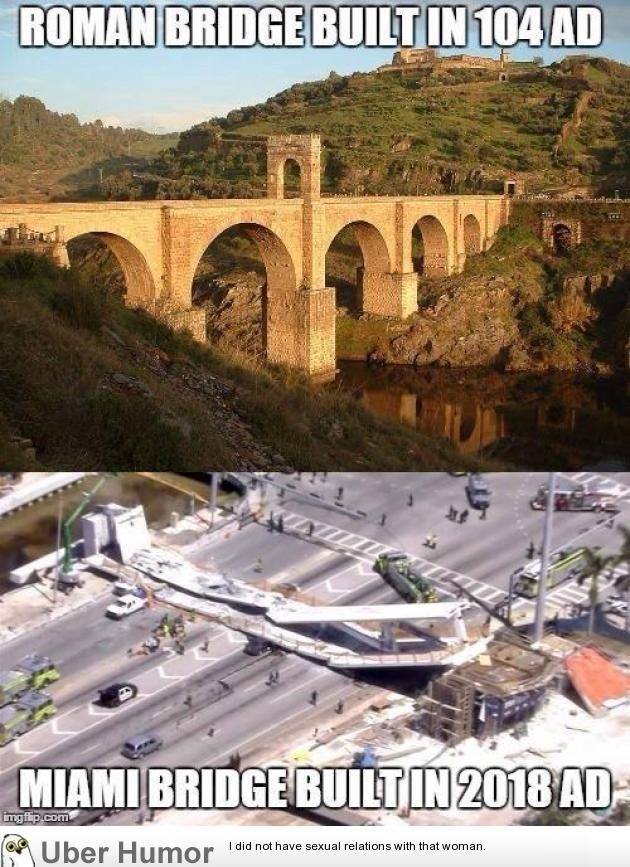 I came across this interesting image on a humor site today and I thought of sharing it. However, upon thinking about it for a bit, I realized that there is much more to the story than a joke, since this simple example is a testament to how things have changed in the Western world since the time of the Romans (who are in a way the ancestors of modern Western civilization, as an organizational social structure).

I'm not a huge fan of the Roman Empire of that era, as it definitely had its issues (plus it had conquered Greece, which was not cool). However, there is little doubt that the engineering of that culture was way ahead of its time, in ways that most people don't realize. For example, Romans used a special kind of concrete that wouldn't decay over time, since they wanted their architectural structures to last as long as possible. This value of timelessness (which imbued the whole city of Rome) was reflected not only in their temples, but also on their more mundane buildings, such as a bridges. Even many of their ornaments, such as the mosaics, were built to withstand the ruthless laws of entropy.

Fast-forward to today, when everything is built in order to maximize its ROI, or in the case of non-profit projects, to minimize their cost. This may be beneficial in the short term, but in the long term it makes for terrible structures. The funny thing is that modern Western civilization prides itself for its technological acumen and its engineering superiority. When modern Westerners look back at traditional societies they see them as primitive (with the exception of the cultures of classical times perhaps, since there are enough wonders they still cannot explain, rendering them bizarrely advanced in these niche fields).

However, even if we have this advanced know-how today that enables us to put a fully electrical car in production and in orbit, we have lost something. Perhaps we never learned it in the first place, since most of our books and videos that make up our educational material focus on practical knowledge, instead of paying more heed to history and the plethora of lessons it has to offer to us. We are so detached from the past, focusing so obsessively on the future (hence the modern ideology of Futurism that reigns supreme nowadays), that we neglect to educate ourselves on the values that are at the backbone of every civilization that had a fighting chance against time. It makes one wonder whether future archaeologists will see us as advanced as we see ourselves, or if they'll see us as a humanity that has lost its way and has forgotten its roots.

Good engineering, just like good science, is not divorced from the rest of culture. It is more practical and easily appreciable, no doubt about that, but it's also heavily dependent on the values the engineer has. The ancient Romans (and many other peoples) remembered that and did what they did for the glory of their culture, not the ego of the person who paid the bills. Also, they aspired to be excellent in their craft, rather than filthy rich. Many of them were probably well-off too, but that wasn't their main motivation. So, even if their tools were inferior to ours, their minds weren't, nor the ideas that powered them. Perhaps that's why they remain relevant in our history books, just like their works that transcendent the boundaries of utility and attained Art status.

Our culture seems so transient, the buildings we design and construct will probably not last more than 80 years or so. They have a huge problem in London with all the high rise social housing that was built from the 1950's on wards - with the corrosion of the steel reinforcing bars, structural instability, deteriorating concrete and rain penetration, the towers are falling apart faster than they can be fixed.... Great read Zacharias \ud83d\udc1d Voulgaris!

#11
You're probably right about the Hoover Dam. It couldn't be build today particularly due to environmental impact assessment and environmental regulations. These assessments are sometimes perceived as very doubtful. About pyramids, we could build them today with heavy machinery. The hardest part would be getting the permit for such kind of structure.:-)

#10
Funny you mentioned the Hoover Dam though. When I visited Las Vegas I took a tour to that place since it was far more interesting than all the casinos in the city. What I remember from this striking me the most was that the same feat (or marvel, rather) would not be possible today, at least for the same time frame, due to the myriad of regulations and other administrative restrictions for the project. On another note, the pyramids of Giza, which are much older than any engineering structure of the Romans (and therefore more primitive, according to historians), were something that people still haven't managed to replicate with the same structural precision. Thank you for your comment!

Many articles were written about Roman concrete. It has been proven far superior to our modern concrete, but mainly because there was no reinforcement. It has shown very little cracking because of Pozzolana (volcanic ash), although not the only one responsible for the durability of Roman concrete. Also, ancient buildings were incredibly over-dimensioned, which made them seismic effective. At that time, there were no cost issues and access to labour or materials was infinite. Modern structures are also designed to last for a long time. It all depends on the type of concrete structure. The Hoover Dam was built to last for centuries, but most buildings are built to last its useful lifetime regarding life cycle costing. There are already concretes that would last for 1000 years and even more, but we need a different kind of reinforcement. What happened in Florida is not about the longevity of concrete (and hope not about maximizing ROI). Many things could go wrong, and usually, as experience showed it’s the sum of various factors that could cause a collapse. We need full access to the facts to be able to identify the possible reasons and without speculations. I was dealing with prefabricated constructions for years and don't see why modular pre-construction technique, accelerated bridge construction, is cited as the cause of this disaster. I've seen some plans and elevations of the bridge on the Internet and found odd that concrete was used instead of steel for a trussed bridge. But again, it's hard to say anything reasonable without knowing all facts.

#8
Thank you William for your question, one that would organically follow as I hadn’t defined the scope of this article in any way (after all, I wrote it at the spur of the moment, as an alternative to sharing an image I came across). I can see how someone would interpret the article this way but I can assure you that this was not my intention, nor the main takeaway. The Romans had a different economy to ours and what made sense financially then may not make sense today, especially in countries with high competition among the various professionals involved in this sort of projects. However, the point I was going after is that these people had more accountability about their work. Nowadays if someone screws up a project like this they will get fined and go to jail. Back then the repercussion were a bit different. However, the system of values put into place would make sure that such situations were very rare. Even the concrete they used was carefully designed so as to not experience fatigue the same way as modern engineering material do. Also, the part were I mentioned the conquering of Greece was a tongue-in-cheek kind of remark as I am originally from there. Don’t worry if you didn’t find it funny. Most of my online jokes are somewhat dry and not particularly funny!

Zacharias, you make some good points. One of which is that engineering decisions should be driven by factors other than simply maximizing ROI. Unfortunately, this bridge collapse is not humorous. It occurred at Florida International University just four days ago, killing six and critically injuring more than a dozen others. It is the kind of engineering failure that is supposed to be far in the past. And it is the kind of occurrence that professional engineers are supposed to devote their lives and careers to preventing. Yet, the facts that are emerging indicate a lack of caution and conservative concern in the face of post-construction cracking. It is a sad day for the profession and one that should not be trivialized. (I would very much like to hear Lada \ud83c\udfe1 Prkic thinks.)

#3
I'm far from being a professor, but I appreciate the sentiment ☺

Zacharias \ud83d\udc1d Voulgaris writes "We are so detached from the past, focusing so obsessively on the future". DO you agree as there are many voices calling for either living in the present and forget all about the past. Myself, I agree as we learn from the past. It is our mirror to what happened and what lessons we derive from it. It is also about finding the repeating cycles of the past that may extend to the future.