Types of Knowledge and Our Role in All This 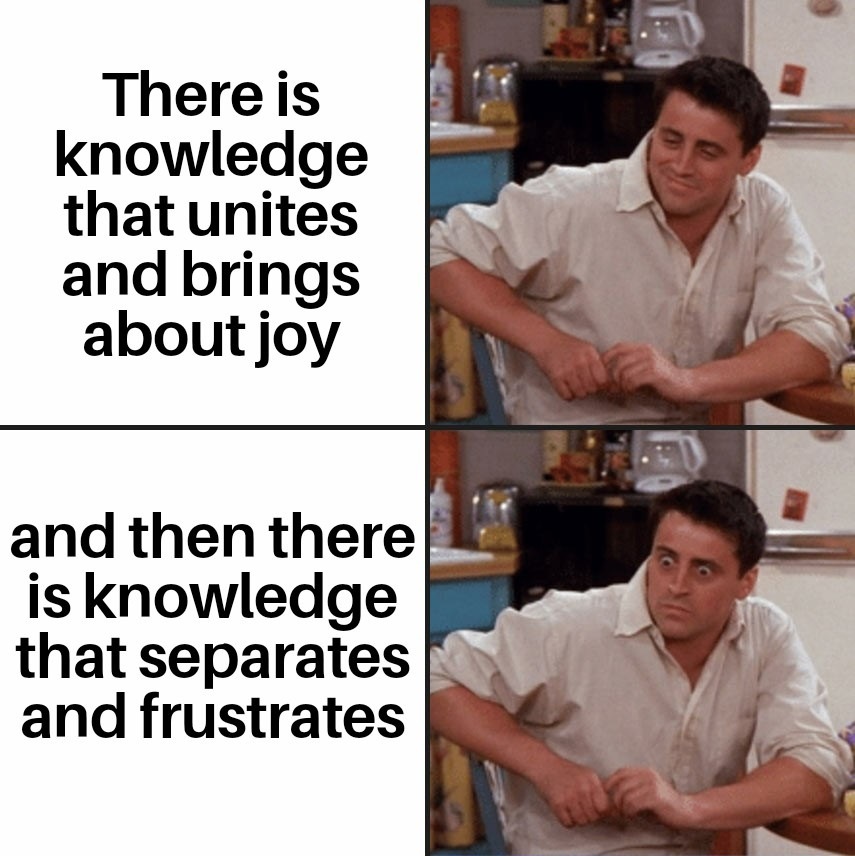 Saying that there are two types of knowledge may seem like an oversimplification, but there is beauty in simplicity. Besides, we can have myriad different taxonomies to satisfy even the most OCD individual, so let's view this as just one of them, one that can help us understand things better and make better sense of the world.

This is the type of knowledge that is refined and connected to other mental landscapes (mindscapes), be it areas of similar structure or even completely different things. The knowledge that matter and energy are interchangeable on the atomic level, for example, is a piece of knowledge of this type. Although it is of the Physics discipline, it has applications in other areas, while it is something that a person who is not even interested in Physics can grasp and ponder upon.

The knowledge that unites is universal knowledge and can even help us organize other knowledge we have. It is a framework of sorts that provides the mental scaffolding of other knowledge and helps us make better sense of the world. The philosophy of science, for example, is like that. Even if you don't agree with everything in it, you can still derive value from it and use it to come up with your own ideas and perspectives on the subject. Knowledge of this type tends to be its own reward and is usually a labor of love.

The knowledge that separates is in abundance and it's fairly cheap. Everyone with the basic toolkit and some training can come up with this sort of knowledge, given enough time. Perhaps that's why the discovery of this knowledge is often accompanied by certain accolades and awards since otherwise no one would be motivated to pursue it. Naturally, not all of this knowledge stands the test of time, just like there are plenty of works of art that may be popular for a few years before they disappear into oblivion.

The Evolution of Knowledge

Just like everything else in this world, knowledge evolves too. Perhaps not in the same way that a living organism evolves, but certain principles identified by the evolution SMEs hold true here too. Things like natural selection and mutation as mechanisms that bring about new forms are also applicable when it comes to knowledge.

Scientific knowledge is a certain set of knowledge that is related to the field of Science and is grounded by a certain framework known as the scientific method. The latter was developed by one of the archetypical scientists, Roger Bacon, whose empirical approach to knowledge was the prima materia that once refined and distilled brought about the formula of hypothesis formulation and rigorous testing that constitutes the scientific method. Roger Bacon is not to be confused with Francis Bacon (one equally brilliant individual who was more versed in politics and literature than anything else).

Scientific knowledge also evolves and has its own set of parameters that are better off being discussed in another article. Suffice to say that it involves the formulation of theories, which are in essence knowledge that lends itself to an application but always has some caveats that are often addressed by various scientists, enabling the knowledge to evolve. A scientific theory, particularly in the earliest stages of it, tends to be the knowledge that separates. However, once it evolves enough to embrace other fields and coagulates into a more concrete form (TRL 7 and above), it can be more uniting. That's not to say that its evolutionary journey is complete, but it has reached a level where it is more universal on some level.

Our role in all this

We don’t have to be scientists to relate to all this. The moment you refer to science for something, you are making use of some preexisting knowledge in one way or another. One can be a consumer of science, just like someone can be a user of a particular website, without contributing to it. That’s perfectly fine. It’s when people rely on this too much and take it as gospel that issues arise. An SME may be more knowledgeable on a certain domain, but (s)he’s not infallible. However, a follower of that same SME may consider this person a prophet of sorts, since the abstraction involved in the consumption of the SME’s knowledge makes it difficult to discern where the limits of this knowledge lie.

So, it’s best to try to exercise common sense when it comes to knowledge. Things may not be as clear-cut as they seem on the website or book we access this knowledge from. Just like scientists ask themselves a series of questions to verify the validity of their knowledge and pinpoint its scope, we should be doing the same to the extent we can, exercising detachment, humility, and discernment. Cheers!

Your last paragraph is the key. We understand confirmation bias but it becomes necessary to understand what bias is being confirmed when dealing with media. Media tends to attach emotional character issues to facts that obfuscate the value of the fact given. During the high times taking pot shots across paradigms is a way to develop clicks and likes. During a pandemic people grow weary of the potshots and lack of knowledge they can gain from those they have elected to be in charge. There is one clear point of knowledge that is not being presented very well. The path out. Speculation on apocalyptic thinking seems to be fully graphed and charted with speculation. Yet we lack any speculation or graphing of what success looks like and what the path to "normal" looks like. In every BOD room right now leaders are speculating on the path to "normal". Yet mudslinging by politicos seem to be focused on who cares the most for the citizens. Right now the people need to hear what success would look like. Realizing that on both sides of the issue risk is involved. Humans are hearty people and can take quick change in fluid situations. What humans cant do is get trapped in a cycle of despair after the government has taken control. They can work with it and share in recovery to a point. But this is a short fuse to the gunpowder shed, if they cant see the endgame.

#3
indeed. Thanks for your input

Zacharias, True knowledge as you point out at the end lies in asking questions. To clarify. To challenge. To verify And any other reason you like. And so it goes.

#1
I suppose some people would do anything for a buck or a like. Still, I'd classify this kind of knowledge you refer to as information or rather misinformation. Thank you for the insightful comment and the share!

Dear Zacharias \ud83d\udc1d Voulgaris This is a lovely post and I like your classification of knowledge. It is simple, but effective. Only less than twenty minutes ago I published a min post in which I referred passing wrong knowledge these difficult times or rumors not to stretch our stress away, but rather to overstretch us and break some of us. Where do you classify this knowledge that spread like fire sometimes? There is no common sense as you highlight the need for it by doing such actions/ Yes, the ease with which we have access to publish is accompanied by dark people who work hard to publish poison and spread it.