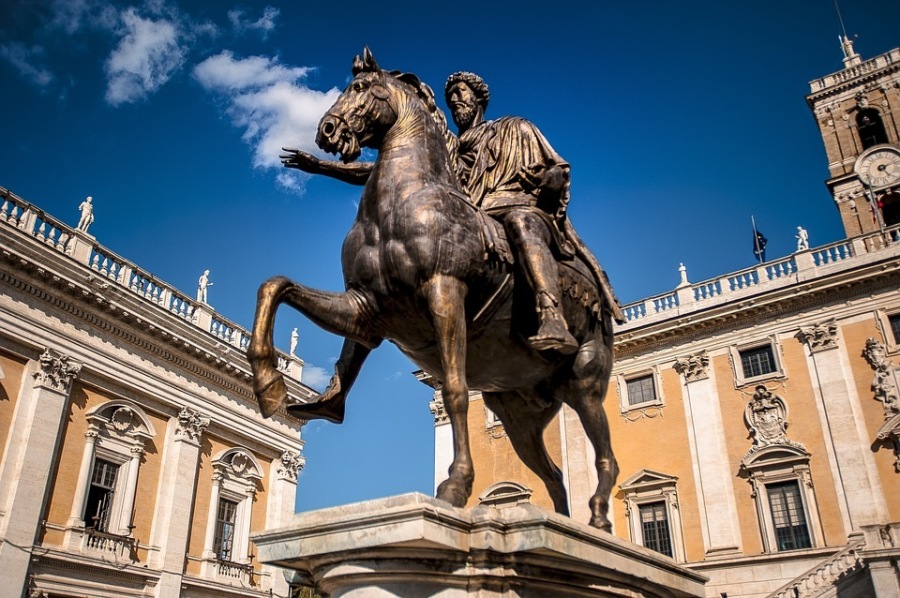 When people hear about philosophers, they oftentimes think of intellectuals and people in some academic position who have the time (and the patience) to read heavy texts by people who may or may not be relevant any more. However, many philosophical ideas have stood the test of time and appear to be as relevant today as they were when they first appeared. Some of these timeless ideas come from the Stoics, people like Marcus Aurelius.

Marcus Aurelius was not a typical philosopher, however, since he also had a vibrant political presence. After all, he was for a number of years the head of the Roman Empire, certainly not a simple task. And back then if you failed as a leader of this sort, the repercussions would be quite serious since the Romans had really high standards.

So, where did Marcus Aurelius' power stem from? Externally, it was given to him by his uncle, when he died in 161 AD. However, even then he was already an accomplished leader with a number of responsibilities in the Roman Senate. So, no-one did him a favor, that's for sure. In fact, many people say that he didn't even want that role and that he didn't have aspirations of this level, as his main concern was to be useful to his community, rather than be the big cheese in a very large empire.

Internally, Marcus Aurelius' power stemmed from his character and his world view. The Stoics were very down-to-earth people and could not be swayed by others' opinions or petty reactions. They believed in gods but didn't talk much about them, since for them the existence of stars in the sky was evidence enough. They also focused on things that we today would call Psychology, Ethics, and good Citizenship. Their writings were quite comprehensive and avoided the empty rhetoric of more modern philosophers. In other words, the Stoics were the equivalent of engineers in moder technological fields; people who are grounded and care more about getting things to work (or fix them if they don't work), rather than impress others with theories and presentations.

Marcus Aurelius didn't have an easy time as an emperor since he had to deal with revolts, bloody wars in the northern borders, and at the same time make sure that the empire maintained its civil status. After all, the Romans prided themselves for being cultured and refined, so Marcus Aurelius could not afford to be a dictator, since this wouldn't fly with his people. Besides, the philosophy he would adhere to was one of peace and civilized resolution of conflict, rather than something akin to Machiavellism.

Despite his relentless obligations and commitments, Marcus Aurelius always found time to reflect on the things beyond day-to-day life, do some introspection, and also keep a diary. As a leader he was just, though not always liked, and put the well-being of his country before his own. Perhaps that's why he's still remembered almost 2 millennia later, while other emperors are known mainly to history students and historians.

Perhaps, there are no people today who can relate to this leader's stature, yet everyone in a leadership position has a lot to gain from him. Be it from studying his biography, or his many writings, a modern learn can learn a lot and be inspired by timeless examples of leadership, such as that of Marcus Aurelius, the Stoic.